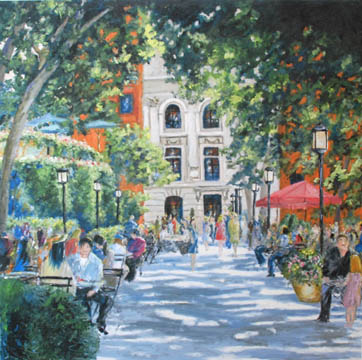 For the artist, Cynthia A. Dawley, this exhibit is a triumphant return to the Les Malamut Art Gallery. It was in 1992, at the very early stages of her career, that she had an exhibit here and sold one of her paintings to the gallery owners of the Designers Gallery in Clark, New Jersey. Working solely in oils, Dawley has gone on to exhibit her paintings in galleries nationally, and is included in numerous private collections. Her works have also been used on the corporate level by such companies as Cartier jewelers, Colavita, and the HBO series The Sopranos. 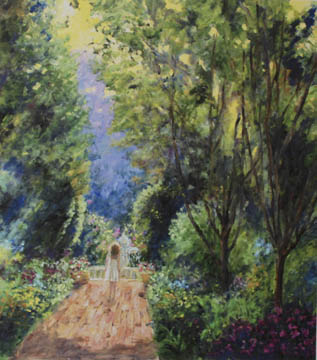 Dawley grew up surrounded by the artwork of her father, world-renowned artist Joseph Dawley. Thus painting has always been a part of Dawley’s life. When she was a young girl it was natural for her to be able to wander in and out of her father’s studio, which was in their home. But it would not be until well into her adult years that Dawley became a painter in her own right and thus also carried on her father’s legacy. “I knew I’d made it, when my work started to be sold to people who had no clue who my dad was.”

Currently Dawley resides in Cranford, New Jersey, in the original family home, with her husband and two children, creating her art in the very studio her father once painted in.